Journey to the End of the Night

The city spreads out before you. Rushing from point to point, lit by the slow strobe of fluorescent buses and dark streets. Stumbling into situations for a stranger's signature. Fleeing unknown pursuers, breathing hard, admiring the landscape and the multitude of worlds hidden in it.

For one night, drop your relations, your work and leisure activities, and all your usual motives for movement and action, and let yourself be drawn by the attractions of the chase and the encounters you find there.

Journey to the End of the Night is a race across the city in [x] parts. Players begin together at a starting point, armed with map ("manifest") of about a half-dozen checkpoints scattered across a city. The first player to reach each checkpoint (where volunteers wait to sign manifests), in order, without being caught by a "chaser" is the winner. Players may only travel by foot or by public transportation; site-specific alterations to this rule have been successful (e.g. buses, but no trains). The game begins with a small number of hand-picked "chasers". Players begin the game with two ribbons: a "runner" ribbon, which they wear, and a "chaser" ribbon, which they must keep on their person. The initial chasers wear the chaser ribbon. When a player is caught by a chaser, he must remove his runner ribbon and become a chaser. Some recent iterations of the game have also offered recognition to the top chase; in this case, chasers will need to confiscate the "runner" ribbons of anyone they catch.

Journey to the End of the Night has been run by the game's creators in San Francisco, Manhattan, and Brooklyn, and by a variety of others in London, Minneapolis, Chicago, Washington D.C., and Los Angeles. 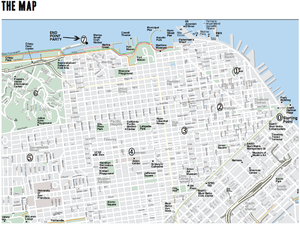 By far the most important aspect of running Journey to the End of the Night is selecting checkpoints. The game was designed to produce the following in the player: FEAR, LUST, PAIN, SPEED, ALIENATION, LONELINESS, HATE, DESIRE. Checkpoints should aim to take players to strange, wonderful, safe, and unsafe places. So try to select locations in unusual or overlooked areas, particularly magical areas, particularly warm and friendly areas, or particularly unsettling areas. Several iterations of the game have tried to enhance the uniqueness of each checkpoint by staging special experiences at each checkpoints - but remember that these should always enhance or play with the "feeling" of the checkpoint's location, rather than attempt to overshadow it. Players will be eternally grateful if a checkpoint or two provides a drink or snack.

You'll also need a starting point and an endpoint. The game is generally started around 7-8pm, so the endpoint is much trickier: a bar is a lukewarm ending to a heartpounding night in the city, but most public grounds will be (officially) closed by the time most players finish (around 10-midnight). Fires, food, and drinks are especially welcome at the end, as is some official recognition of those players who make it all the way to the end! There will be at least a couple of hours between the fastest player's finish, and the arrival of the last stragglers, so make sure your checkpoint is a great place for players to hang out, catch their breath, and swap near-death experiences.

The routes have tended to be around 10 miles long. Factor in things like hills and availability of public transportation, of course. The fastest player should take somewhere around 90 minutes to run the route; most players will take around 3 hours. Testing your route is a must. Preferably at the same time the game will be run - will that bus be running, will that building be open?

You'll need to define "demilitarized zones" - safe areas - that surround each checkpoint (to try to prevent "babysitting" by chasers). Other DMZs should be specified as appropriate; consider bus shelters, trains, etc. Keep these rules clear and simple: a player's instinct upon seeing a chaser should be running, not appealing to the authorities.

Charge your cellphone! Initial chasers, checkpoint staff, and the overall organizers need to stay in touch (and should have a list of phone numbers). And when something goes wrong - say, a checkpoint has been shut down - you'll need to get the word out to players quickly. Your friends/volunteers at the checkpoints won't want to hang around for hours and hours; keep track of players' progress along the route by checking in with your checkpoint staff frequently (each checkpoint should call you when they get their first runner). Make sure you set an end time - players will go off on intricate 9 hours routes if you let them! Also, remind your checkpoint staff that they shouldn't be difficult to find; if some poor player keeps walking by, they should say something!

Finally, Journey to the End of the Night is not easy. Runners who have been caught tend to become absolutely ruthless chasers. This is good. But you'll also need to make sure that your initial group of chasers don't catch too many people, or there'll be no one left. Some Journeys have managed this delicate balance by giving initial chasers instructions (e.g. you can only catch one runner each), by restricting their numbers, or by adding a kind of "get out of jail" card that is difficult (but presumably worthwhile) for chasers-who'd-rather-run to go find. The first sighting of chasers should be dramatic: players leave the starting point in large groups, which must be broken up. And some of those phone calls should be tracking the leading runners, and making sure that they don't completely lose the chasers. Reports of shifting alliances between runners and chasers remain unconfirmed, and part of the game. All of which is to say: keep an eye on things, but remember that a little injustice and unpredictability are part of the experience; don't micromanage your game in progress. 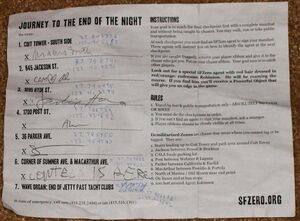 Your goal is to reach the final checkpoint first with a complete manifest and without being caught by chasers. You may walk, run or take public transportation.

At each checkpoint you must find an SFZero agent to sign your manifest. These agents will instruct you on how to identify the agent at the next checkpoint.

If you are caught (tagged), remove your player ribbon and give it to the chaser who got you. Put on your chaser ribbon. Your goal now is to catch other players.

(These are the ten most recent Flickr photos of Journey to the End of the Night. To add your own, just add the "ludocity:game=journey" tag to your Flickr photos.)