Two teams of shopper-herders race each other to use coded instructions to steer their designated shopper through a shopping centre to the finishing location in as short a time as possible. Chuggers circle looking for opportunities to scupper their plans...

Before the game you will need to find a suitable shopping centre (or possibly a pedestrianised high street) and decide on some start and finish points for your shoppers. Try and make the distance and difficulty equal for each team.

For each team you will need to prepare 5 different cardboard 'shopping bags', preferably in easily distinguishable colours. Bonus marks for adding shonky approximations to famous store logos on them (this may also help to signal the presence of silliness to any concerned security guards). 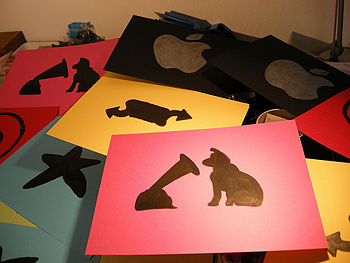 Each team also needs a key with each of the possible colour combinations and the directions they correspond to. You can use the “list them” function on this web page to help you make sure you include all the combinations: http://www.mathsisfun.com/combinatorics/combinations-permutations-calculator.html 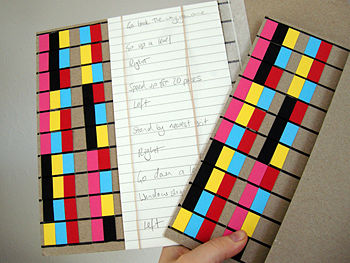 Combination keys. It's useful to include a flap that hides the instructions from the herders and also to have the instructions on a removable sheet so it's easy to swap things around between games. These keys include the 3 components of the code in the left column, and also the 2 excluded components in the right Just In Case It Turns Out To Be Useful

If you arrange your key entries in the same logical way that the above web page gives you, you can number the backs of the shopping bags and request the herders stand in numerical order when they present their directions. Make sure you flip the numbering so that it reads the right way from the point of view of the shopper. For example, if you construct your key based on the order pink, black, yellow, blue, red, then number the shopping bags as follows: pink = 5, black = 4, yellow = 3, blue = 2, red = 1.

Having the shoppers stand in numerical order like this makes it a lot easier to look up the combination on the key.

You also need to assign an instruction for movement to each combinations. Examples could be: walk straight on; bear left; window shop for 1 minute; stand by the nearest exit; go up one level. There should be a variety of long- and short-range actions, plus at least one nasty one (like the window shopping) that the herders should ideally avoid.

Chuggers could have clipboards clipboards, pen and paper as costume props. (Each herder team will require these if you are allowing them to take notes.) Chuggers require a stopwatch or other timing device if you are wanting to be precise about time penalties. Herders start off with 20 units of (pretend) money per team, split between each herder.

You may want to furnish the shopper with props to identify them as being part of the game, or you may want to have them as discrete as possible so that shoppers outside of the game have to really look in order to figure out what's going on...

Each team consists of 5 shoppers and a chugger. There is also a shopper for each team. Shoppers are part of the crew and will need a timing device to time how long it takes for them to be steered to their destination.

Each herder has their own bag and keeps this throughout the game.

3 herders can mob together to form an instruction code by standing side-by-side in the direct line-of-sight of the shopper and holding their bags aloft. (Waist height also works, and may be best for your first run in the shopping centre as you gauge how security will react.)

Different combinations of bags will cause the shopper to modify their direction of travel in different ways.

The herders will have to pay attention to the combinations they try (perhaps easier if thought of in terms of which bags are not involved) and try to relate them to the subsequent actions of the shopper. There are 10 possible codes – in theory only 2 for each herder to remember – in practice, in the first playtest, we found it best to allow the herders to keep notes on the combinations they tried and what they thought the instructions were.

If, at any time, the herders gather together in a group of 4 or 5, they are liable to attract the attention of the opposing team's chugger (see below). Herders will therefore have to find ways of communicating across long distances, or risk huddling together with a lookout.

Should the herders accidentally instigate a move from the shopper that they want to abort - for example the shopper starts heading towards the escalators - they can perform a blocking manoeuvre. This, however, comes at risk of chugger intervention.

Blocking manoeuvres are performed by all 5 of the herders placing themselves in a tight group directly in front of the shopper. The shopper, angered by the extreme stupidity of people who just stop in the middle of the throughfare, will take evasive action. Possibly whilst swearing under their breath. The exact nature of the evasive action is unpredictable and could see the shopper move off in any direction. Use with caution.

The chugger's role is two-fold: firstly, from the point of view of running the game in a busy public space, the chugger stops large, clusters of excitable players forming and annoying security. Secondly, within the game, the chugger's aim is to hinder the progress of the opposing team.

Equipped with their clipboard (presumably holding a very detailed direct debit form), a chugger can approach any member of the opposing team engaged in a huddle consisting of 4 or 5 herders. For the purposes of the game, huddling occurs when herders are 5 metres or closer together.

Once a huddled herder has been approached by a chugger, they (and their shopping bag) are out of play for 2 minutes (or the count of 120) whilst they 'fill in a few details', preventing any coded instructions involving that colour from being used within that time. The herder in question should be led away from the others a little to prevent communication with them too. The chugger also relieves them of 1 unit of money.

Once the herder has been released, the chugger must return to their own team and give the money to their shopper. They can then return to the vicinity of the opposing team to wait for an opportunity to strike again. They may wish to sneak, so that their targets are not aware of the chugger's presence and may be tempted to form a quick huddle...

The shopper moves at a fairly sedate pace (as slowly as the busy-ness of the shopping centre permits). In order to successfully communicate an instruction to the shopper, the herders must form their mob several metres away from the shopper. A mob forming too close to the shopper is likely to annoy the shopper and induce erratic behaviour or panic window shopping.

The shopper must follow the instructions received from the herders in as consistent a manner as possible (allowing for changes in the surroundings and making allowances for other users of the space).

You will find that some instructions have a natural end point (such as "go to the nearest exit"), whilst others (like "walk forward") may need to be limited to a certain number of paces.

Play finishes either when one or both of the teams have successfully guided their shopper to the end destination, or at a pre-arranged finish time. The actual times taken to deliver the shoppers are adjusted by an amount corresponding to how much money the chuggers have taken off the other team. For example: 1 unit of money acquired could reduce the acquiring team's time by 5 minutes. (You'll need to tweak this depending on how big the space is and how tricksy the directions are.)

The team with the lowest time (after adjustment) wins.

In the case that neither shopper has reached their destination, the team with the shopper with the most money wins.

(These are the ten most recent Flickr photos of Shop Mob Ability. To add your own, just add the "ludocity:game=shopmobability" tag to your Flickr photos.)