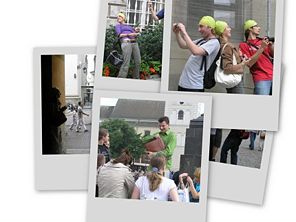 Snapshots of a game in progress.

Players scramble to snap pictures of each other in this fast-paced game of photo tag.

"Imagine a surrealistic dream in which you can see a city, just like yours – the same streets, buildings and people. The city lives in its normal rhythm but once in a while strange things start happening there. Absurd. Mysterious. Sometimes unusually dressed creatures appear in the city, although no one knows where they came from and the hunting begins. Venatio. Surrealist hunters do not attack outsiders; they only fight with one another. With the third eye. Lumen. Each one takes an aim and is an aim himself. If you were one of them you would surely know what it’s like when a threat may come from anywhere, when you have to constantly run away and chase at the same time, when you have to hunt. Where would you hide? Where would you attack from? What would your strategy be? Now imagine that this surrealistic dream becomes a reality. Lumenatio."

The rules are simple. You have to hunt as many other players as possible and not let them shoot you. Your weapon is your digital camera and your allies are perceptiveness, dexterity, intelligence and urban corners.

With the game instructions (rules, timeframe) players should be given a swimming cap, that they have to wear during the hunt in a way that the number written on it is visible on the back of their head. Wearing the swimming hat in a different way, not wearing it at all, covering the number or breaking one of the other rules results in disqualifying the player from the game.

Each swimming hat is marked with a different number, which is the unique individual player number. For the period of the game this number becomes player's name and the other numbers are their targets. During the game you have to hunt as many of them as possible. The shot person is the person who you took picture of in a way that the player's Lumenatio Number is without any doubt visible on the picture. You can use zoom and other functions of your digital camera, but think in which situations they may be useful.

The game may take place anywhere and the players themselves will decide if they will be hunting each other in large spaces or playing hide and seek in narrow streets, corridors, buildings, roofs, shops, buses... During the game it is important to mind own safety and safety of other people. You are not allowed to break any law. You are responsible for yourself. You play by yourself, not in groups (your photos are only yours), but you can try to unite with other hunters. If you send photos from more than one digital camera you will be disqualified. The winner is the person who shoots the biggest amount of Lumenatio Numbers. If two or more players will have the same number of points, the person who was shot less times wins. The winner can be only one! Only pictures without any resizing/editing are valid. Please respect those rules, so all of us can have exciting and fair hunt.

(These are the ten most recent Flickr photos of Lumenatio. To add your own, just add the "ludocity:game=lumenatio" tag to your Flickr photos.)