You're a lonely number looking for that special someone. Find your true love, have as much sex as you can, don't let your heart be broken too often.

{{#ev:youtube|4OXnh-PBbJ8|300}}
Watch this instructable video to get started!

Every player needs a pen and a card that they can wear on their foreheads. In the center of the card is a four digit number. You can use your own numbers or use ours (see below). It is a good idea to use stickers for the numbers or mark them by something tangible (small holes should do), so that players can feel when they are covering the number with their hand. To the right and left of the number, mark two fields: one for "true love" and one for "desire". In the desire field, draw three small hearts. Remember to make the strings that tie the cards to players' heads longer as you think they should be. Some people have surprisingly large heads. For the playing area choose a small or medium sized, semi-closed area with plenty of small hiding places like poles, trash bins, small trees or hedges (remember: the players only need cover for their foreheads). Before the start of the game mix the cards, let the players pick one, give them a pen. Tell players to write down their number onto their palm so they can remember it and remember them to be careful when putting the card on their heads, others might try to peek. Wait until everybody is ready before you start the game.

You're a lonely number looking for true love (and as much sex as possible).

After you have received your number, hide it from the other players, find a safe spot and write the number down. Now put on the number (don't put it on upside down :) and wait for the starting signal.

You have to hide your number but you must not use your hands to cover it (see two exceptions below). Hide behind bushes, behind poles, look to the floor, look up in the sky. The number is your identity ... be careful to whom you reveal yourself. In the beginning you have three hearts of desire, if all of them are broken, you cannot continue the game. You're emotionally empty.

(further rules to explain see below) 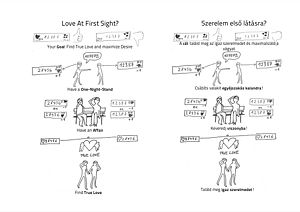 The english and hungarian rulecard.

There are three possible interactions between players:

If you find out the number of another player, you can call his number out to have a one-night stand! He must stop and come over to you. Both of you may now cover your numbers with your hands. The seducer gets one of heart of desire and the seduced looses one. Only draw in the "desire" field. Watch out: If you loose all of your desire, your heart is broken and you are out of the game!

Each gets or looses 1 heart of desire

To have an affair, convince another player to sit down on a bench with you. Once sitting, both of you may cover your number with your hand. You now have to show each other your numbers. If the numbers match, it’s true love! (See below). If not, then you’re just having an affair. Depending on how the affair goes, each of you can draw or cross out one heart of desire (it’s up to you to decide).

When two players find true love on a bench, both draw a big heart into the others "true love" field. They may now get up and move around the playing field holding each other’s hand while hiding their numbers. Beware: Once you let each other go, they cannot reconnect in this way.

Every player can only have one interaction per game with any player. Yes, that means that the seduced can never ever seduce the seducer.

The numbers are semi-random, produced by atmospheric noise, ordered to ensure best playability.

The scheme is kind of:

Oh, one last rule: the digits of a number should not repeat.

(These are the ten most recent Flickr photos of Love at First Sight. To add your own, just add the "ludocity:game=loveatfirstsight" tag to your Flickr photos.)

Love at First Sight was created in 2011 as part of the Nyugati Game Set by Invisible Playground, working out of Field Office Budapest at PLACCC Festival.

It is loosely inspired by the Hungarian youth camp capture the flag game War of Numbers and the game Heartbreaker by Charley Miller.