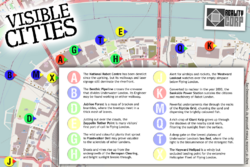 Travel between parallel worlds and then make your way home, but watch out - in some versions of the city, the locals aren’t exactly friendly...

Visible Cities is a checkpoint chase game where players score a point for visiting a checkpoint, and lose a point for being caught by a chaser. The twist is that the checkpoints are spread across four or five differently coloured "universes" - you can only enter a checkpoint that exists in your universe, and can choose to transport yourself to a different one when you pass through it. If you encounter gates, players or chasers from other universes, they are "invisible" and have no effect. It's a good way to fit a big chase game into a smaller area, by forcing players to double-back and encounter the same terrain with different dangers.

Visible Cities needs a large playing area (maybe a square mile) and around a dozen checkpoint locations (known as "Gates"). The Gates come in four colours, to represent the four parallel universes they exist in - you can divide them up how you like, but we went for a 4/3/3/2 split, to make the "2" universe a bit of a rarity, and the "4" a little more populated. For the Sandpit playtest we had Robot London, Underwater London and Forest London - for the Hide&Seek Weekender, we also added Flying London. When you're scouting out locations for the gates, you can try to pick things which would be interesting to reimagine in a parallel universe (we had a large balcony of the Hayward Gallery as a helicopter landing pad, the Hungerford Bridge as a crevasse-spanning oil pipeline, that kind of thing).

Each Gate has an Engineer, who should be dressed in a way that demonstrates the colour of their Gate (we used sports tabards) and who carries ribbons in the colour of the universe that their Gate transports to. When we ran the game for the Hide&Seek Weekender, each Engineer also had a sound-effect box, and some props for challenges (more on which later).

Each Gate also has a patrolling Chaser, who should again be dressed in a matching colour (we used coloured eye masks as a uniform, and added thematic bits of costume related to the universe).

You need a load of ribbon armbands for players. Players wear ribbons to show which universe they're in, and swap ribbons when they pass through a gate. You can split the starting players across two or three universes; each Engineer should have a bag of ribbons of the colour that their Gate transports to. (When we ran it, the Engineers nearest the starting locations had about half as many ribbons as players; the further out had about a third. We had one moderator on ribbon-delivery duty, picking up spent ribbons from Engineers and passing them to others.)

Each player wears a ribbon on their arm to show which universe they are currently occupying. If a player is in the "red" universe, they can only perceive and interact with red Gates, red Chasers and other players wearing red ribbons. If they approach a blue Gate, the blue Engineer will ignore them; if they encounter a green Chaser, that Chaser won't be able to "see" them; if they meet a yellow player, they must pretend not to see each other.

Each player has a map with the Gates marked on it. Each Gate exists in one universe, and leads to another, so they can travel between universes by visiting a gate in their current universe, and asking the Engineer for a ribbon for that Gate's target universe. Optionally, the Engineer can request that the player perform some kind of task or forfeit before swapping ribbons. Tasks we used on the first run (about two thirds of the checkpoints had tasks) included:-

Whenever a player visits a Gate, the Engineer stamps that player's map to show that the Gate has been visited (whether or not it's been passed through). The aim of the game is to get as many stamps as possible.

Chasers exist in each universe, and will roam around looking for players of the matching colour, and chase them. If a Chaser tags a player, that player must surrender their map - the Chaser may cross out any one of the Gates in their own universe, and hand the map back. A crossed-out Gate may no longer be scored. (It may still be used, it just can't be scored.) If there are none left to cross out, nothing happens.

Chasers are scared of Engineers, and won't come within twenty feet or so of them. (We gave the Engineers sound boxes so that they could scare them away with silly noises.) This means that players can relax when they reach a checkpoint.

(These are the ten most recent Flickr photos of Visible Cities. To add your own, just add the "ludocity:game=visiblecities" tag to your Flickr photos.)