A super simple real-time Ninja-Joust-style dancing-fighting game played with teeny tiny turtles from China. The turtle rests on your hand. The turtle doesn't like the other turtles. Help your turtle push turtles off of the other players' hands!

Every player needs a small turtle. Put the turtle on one hand. It rests on the top of your hand. Please don't use your finger or clothing to hold it. Or glue, or bubble gum. It just sits there. Keep it comfortable!

{{#ev:youtube|rGRyMkejMxE|300}}
Daniel shows you the basics of Turtle Wushu.

Form a circle and join your turtle hands together in a star shape (almost touching each other), so the turtles can greet each other (and remember the scent of the enemy). Slowly move your away from the others and whisper "Turtle Wushu!". The game starts when all turtles are in a safe distance from each other.

Use your free hand to hit the hands of other players, so that the turtle tumbles to the ground. The last player with a turtle on her hand wins the round. Tip: Sometimes you don't even have to make direct contact - just fake an attack or make your opponent laugh, and the turtle drops by itself...

Hitting any other part of the opponent is considered a foul. When you lose a turtle when fouled by another player, put the turtle back up. There is no penalty for fouling once. If a player fouls all the time, kick her out of the game. Turtle Wushu is more like Basketball than Rugby. 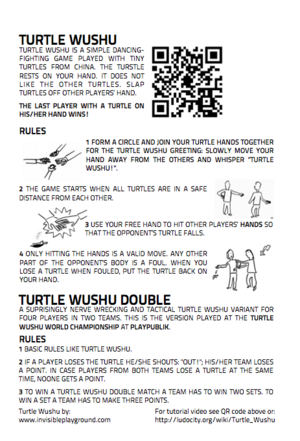 {{#ev:youtube|aBmxvsemNIY|300}}
Daniel shows you how to play Turtle Wushu Double.

A surprisingly nerve wrecking and tactical game variant for four players. Best played in two teams of equal strength. Similar to doubles in Tennis, two teams with two players play against each other. The team that loses a turtle loses a point. If both teams lose a turtle at the same time, no point is awarded. A typical Turtle Wushu Double set consists of best of five rounds.

An even more tactical approach. Turtle Wushu with 16 bits! 4 players compete against each other. At the beginning of each round, each player receives 4 bits (use poker chips or coins). Players spread out in a square shape, so that there is an equal distance between each player. 3-5 meters works well. They each claim a base by putting there chips down on the ground.

The goal of the game is to defend your base and steal as many bits as possible from the other bases and bring them to your base.

You may only use the hand that your turtle is resting on to transport bits. You are not allowed to use your free hand. Carefully pick up a bit with your fingers while leaving the turtle on your hand. A turtle can only store 1 bit at a time!

If you are attacked by another player and your turtle falls, you must also drop the bit you are carrying. You then count down backwards from 10. When you reach 1, you can pick your turtle back up and rejoin the game.

You can play with up to 6 players (that would be 24 bit version), then it gets a bit too crowded.

If you have more than 6 players, you can either organize a tournament, or play Turtle Wushu Team Tactics. This is just like 16 Bit Turtle Wushu, expect teams of 3 players work together. Set up the bases with more distance between them, 20 meters is interesting. When your turtle falls, not only count down from ten but additionally head back to your base before rejoining the action.

Playing without a turtle

You can't find the certified Wushu Turtles in your local sports shop? All other rubber animals are all sold out, too? You just want to have us much fun as you can in a limited time? Then play Turtle Wushu Money: Instead of a turtle put a coin on your hand. Count how often you lose your turtle. When you lose it, shout out the number of times you lost it now, and just put it back on your hand. The winner is the person who lost the least. In a further variant, balance the value of coins against the skill of the players and multiply in the the value with the times lost. Balancing a budget is hard!