A comic-like battle gamegame with a simple fighting technique for two groups with different lifestyles who share one place. 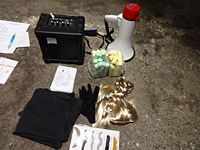 All props that you need for the game

For the game it is important to mark two different teams. Butchers fight versus bitches. We decided for the comic-like epic battle and visual props like blond wigs, moustaches and black aprons. Also you need a piece of chalk for every player. Here you can see all props we used:

Mustache & blond wigs for the Bitches

Apron for the Butchers

You need chalk to mark your victims on the asphalt

Since both teams are moving in their own certain rhythm you need music with a good continuous beat that supports both ways of moving (many many small steps versus biiiig and heavy leaps). We used Butch - Mushroom man (http://www.youtube.com/watch?v=6jcVA0v1Lps).

Each of the two-persons BUBI-fight demand a space as big as an arms length. The place we played it was a round-shaped parking lot area between a meat packaging area and night clubs. (Bitches and Butchers are a game about two different social groups that have their life style in the same space but they use it in different ways. So if you really want to make a proper playing field you should choose a spot where two different group co-exist. The chosen space should be a good spot for two separated march that ends in the two groups colliding with each other.)

One of the urban qualities that your chosen playing field should contain is a dry asphalt area in order to draw dead bodies on the ground (or ground material that is easy to draw on with chalk).

Mark the end of the playing field with chalk

The core game mechanic/fighting technique is based on a Japanese high school game and quite simple. It is one versus one. The players are organized in 2 teams: Butchers fight versus Bitches, so we called the game BUBfIight. How does it work? Stand face to face to each other- in no more than one step distance. Touch each other’s handpalms. Don’t grab! Try to disturb the balance of the other player. Who moves their feet first, loses and is dead. Your goal is to occupy as much space for your team. Kill as many rivals from the other team as possible and mark their dead bodies on the ground. (As you might imagine, height and strength gives real advantage in winning the game. To equalize the teams we devided the players in two teams according to their physical height. Each team has a special way of moving and standing still: Taller players (= bitches) stand and move like if their knees were bond together. Smaller players (= butchers) have a very stable stand and walk straggle-legged and benefit from more stability. We had good experiences in balancing the game like this.)

To form two teams, line up shoulder to shoulder according to your height and then split the group in the middle. Put on your props: bitches wear fake mustaches and wigs; butchers wear aprons. The Bitches team and the Butchers team are separately trained how to move by their team trainer.

To start the game each team stands at their starting position. When the music starts Bitches and Butchers start to march towards each other (at all times moving in a way they were trained). As soon as the teams are close enough individual Bitches and Butchers can start to challenge each other by pointing at their opponent and shouting "BUBIFIGHT!”

Then the BUBIfight begins: Face each other with not more than one step distance. Put your flat palm together without grabbing each others hand. Now start to push each other so that your opponent has to move his/her foot cause he/she is loosing balance. The person who first has to lifts a foot from the ground has lost the Bubifight.

When the playing time is over the music stops and dead bodies are counted. The team who killed the most opponents wins. 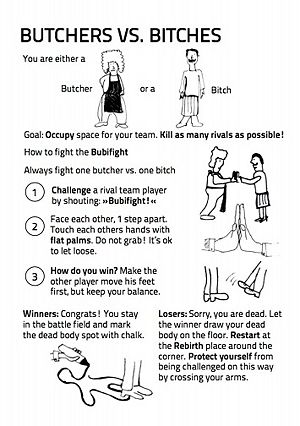 (These are the ten most recent Flickr photos of Tuesdaymorningbubi. To add your own, just add the "ludocity:game=butchersbitches" tag to your Flickr photos.)

Since the beginning of the 2000’s Copenhagen Properties have been developing the area of the white meat city: An increasing number of work and event spaces for the creative industry, restaurants and bars popped up. Now white meat city is said to be one of Copenhagen’s trendiest areas- but still serving its original purpose as part of the meat industry. Different groups in peaceful co-existence: »You see each other, but you don’t see each other«, Mette told us in an interview. Also invisible, nonetheless threatening is the Ammonium, which is stored under the area. Ammonium ions are a waste product of the metabolism of animals and also of rotting bio-mass and highly dangerous. In this area it was used as a coolant for the whole meat packing district. Old pipes run everywhere and old containers lurk beneath. That is why a ban on reconstructions is in place in the vicinity of the storage.

In the end, after all the killing, you look at the asphalt and just see masses of body outlines, shaped like bacteria or amoebes. A nice co-incidence, that ammonium is the element of decay. You find it as a waste product of the metabolism of animals, but also in rotting biomass. What remains is- bacteria eats them all.

Disclaimer: We borrow the term from Andi Zeisler, founder and editorial director of the magazine Bitch: Feminist Response to Pop Culture. She uses the term bitch »to describe any woman who is strong, angry, uncompromising and, often, uninterested in pleasing men. We use the term for a woman on the street who doesn't respond to men's catcalls or smile when they say: Cheer up, baby, it can't be that bad. We use it for the woman who has a better job than a man and doesn't apologize for it. We use it for the woman who doesn't back down from a confrontation.«