Get buttons to identify the teams. Every team has an own motive and every team member will wear the button of his/her team.

The game works with 5 person teams. There should be two blond wigs, two headphones and two sunglasses for every team - one for an impulse and one for the focus who gets one of each item.

The game master hands out the props at the beginning end of the bridge and explain the rules of the game. Before the game starts, the Impulses put on their prop (wig, sunglass or earphone) and their team identifying button. 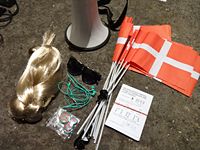 All props that you need for the game.

Mark the end of the playing field with chalk.

Build teams of five players. Four players will be Impulses, one player will be the Focus.

The goal of your team is to be the first to get all players across the bridge.

The Focus also may distract Impulses {only of the own team?} by displaying the distracting feature (wearing glasses, wearing a wig, smiling or wearing earphones).

The Focus has to walk straight on the bridge and can only turn at the points marked with the flags. 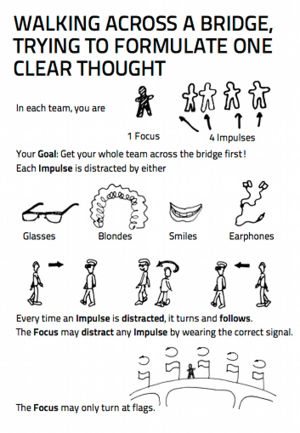 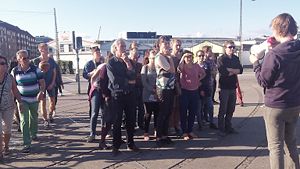 Connecting two worlds the bridge over the railwaytracks between meat packaging district and Fisketorvet's shopping center is crowded by pedestrian and bikers. Especially in the rush hour, loads of people cross the bridge juts like impulse, fired off, precisely adjust. Non-undirectional movements are not intended. Usually.

But no one is immune against distractions. The stream of consciousness provides a lot of them: Moments of happiness, acoustic stimulation, distorted vision, blondes. How not to completely lost direction? If you are lucky, you find a focus thats helps you back on track. And how do the distractions react when you suddenly follow them?

What could be reasons for changing directions? WALKING A CROSS A BRIDGE TRYING TO FORMULATE ONE CLEAR THOUGHT breaks down the spatial metaphor.

And sometimes i turns out that the journey really is the destination.