Fill a map of your city with surprising stories, and try to work out whether other people's stories are true.

You'll need lots of small red and green stickers. A really really big sheet of paper, or many not-so-big sheets of paper, or some other surface for people to decorate (for example, the canvases above). Lots of masking tape or some other way of attaching the surface to a wall. Something to draw or create images with: we used sticky-backed felt above, but a couple of decent permanent markers, and a lot of cheap felt-tipped pens, will also work; you will never get these back, and the 12-for-a-pound type work fine, so no point going for anything more extravagant. (You might need to get a few packets.) Some printed copies of the instructions for players.

Stick the sheets of paper (or other surface) on the wall, or onto a table if you don't have a wall. These will be your map. Ideally the map should be big, perhaps big enough that not everyone can reach right to the top; it's been played with nine sheets of A1 paper (torn out of a flip chart) in a 3×3 grid, making a map of around 1.8 by 2.5 metres, which worked well with a group of 100 people who were around for three or four hours. A game with more players or a longer playing time might need a larger map.

Draw a rough map of whatever city you're in on the paper. Copying from a smaller map using grid drawing will probably do fine. You just want to get in the big bodies of water and bridges, a few main roads, perhaps some major parks and very prominent buildings, and the place where you're playing the game; it doesn't have to be too detailed, just enough to let people orient themselves. Try to get it more or less accurate, but a couple of mistakes won't matter.

Once you've drawn the map, put up some instructions for the players (either write these up yourself or download them as a word document here). Some players will miss these if you just stick copies at the side, so it's probably worth sticking one in the middle of the map as well.

Put out the red and green stickers and felt-tipped pens; perhaps use them to add a few landmarks and stories to the map to get other people started. 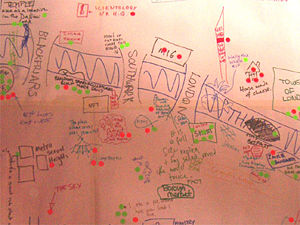 A Trap Street game, using a large sheet of paper.

You're welcome to play multiple times; but every time you play you must always judge four things already on the map, and add one true thing and one false thing of your own. You may not judge your own additions.

You could probably play this board-game-style, on a smaller map with normal pens, taking it in turns to fill in a fact and then all voting.

(These are the ten most recent Flickr photos of Trap Street. To add your own, just add the "ludocity:game=trapstreet" tag to your Flickr photos.)