Welcome to the Heart of Europe Museum Resort! It is the year 2089. Players submerge in a preserved world of the early 21st century, taking a tour through objects and daily routines of past times. The Resort is a high tech theme park that is even furnished with humanoid robots resembling and behaving like real people of the early 21st. century. The tour is completely save ... unless ... where was the escape tunnel again?

Download the audio track for the museum audio guide system and pull it on mp3 players. Download track in English or Czech. Fix together two mp3 players and connect a jack splitter to each of them so that four headphones can be plugged into one device. One team of 4 players will share one of these in the game. Download the audio track for the recharging station and put it on three mp3 players with splitters. These will be used by the museum guards.

Print out escape instructions with map for all players. Prepare a package with the map and pens for every player which will be handed out by the security instructor in the moment of the incident. Three crew members will be the museum guard robots. Equip each of them with a headlight and a key chain (with a lot of keys), and an mp3 player with the recharging audio track. These guides will walk around the passage rattling with theirs keys and causing reflections on the shop windows and the mirrors of the passage.

Start at the back entrance of Poliklinika Palackého that you can access from the south-east corner Franciscan Garden (see map). The players are divided into teams of 4 players. Each player gets an earphone. Each team gets an mp3 player unit (see preparation) so that all of the team's players can plug them in.

The players don't need any instructions at that moment except that they should follow the audio guide. They will get explicit instructions at a later point that will be described below in this section. 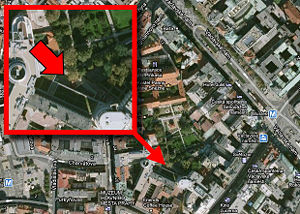 Where the game starts.

When every team is equipped with mp3 players and plugged in, a crew member turns on both mp3 players of one device. If possible, this should happen quickly, that there are not more than 20 seconds between the teams' launching time. In the first part of the game the players just have to follow the directions given in the audio track and enjoy the tour. They are guided through the back of the polyclinic, through a passage, crossing the Vodičkova st., entering Lucerna Passage and arriving to the Golden Fountain in about 8 minutes. When the teams arrive to the golden fountain the incident happens, and the games turns into an adventure. 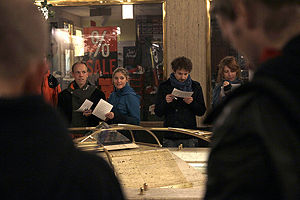 Security briefing at the Golden Fountain. 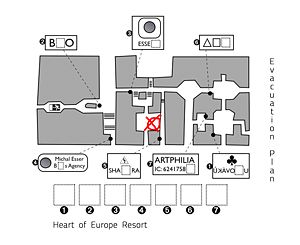 Location of the Golden Fountain.

When the teams reach the Golden Fountain the audio tour abruptly interrupts and the players hear a security call telling them to stay at the Fountain, wait for the security instructor and take off their earphones to signalize that they are in danger. At this moment the security instructor (SI) approaches the group, hands out maps and pens to every player, collects the mp3 players but leaves the earphones with the players. Then the SI gives the teams following instructions:

After the security briefing time starts to run to complete the code sequence, players spread out to find the codes. Teams can choose to stick together or split up at that stage, they have to gather again at the security tunnel though.

In case a museum guard calls out a player, the guard takes the player to a rather hidden corner and connects the earphones of the caught person to the mp3 player with the recharge audio track. The player being connected to the recharge station has to wait until the track is over before returning into the game.

At the escape tunnel the security instructor is waiting for the teams and checks whether every person from the team is present and whether they have the completed code sequence. In case they have, they are free to pass the tunnel out of the passage to Václavské sqr. 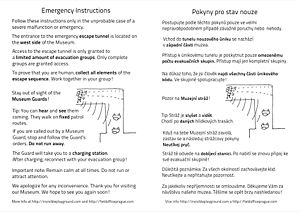 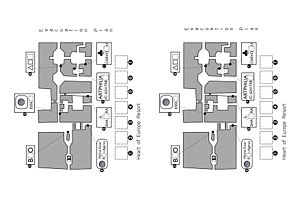 (These are the ten most recent Flickr photos of The Lucerna Incident. To add your own, just add the "ludocity:game=lucernaincident" tag to your Flickr photos.)

The Lucerna Incident was developed by Invisible Playground at Field Office Prague during 4+4 Days in Motion Festival.

Other games from the Národní Game Set