Of the various clandestine rites of Freemasonry this musical ritual, which dates back to the very earliest lodges, has been guarded with perhaps the greatest secrecy - until now ! Although game-like in structure, there are no winners, only the emanation of an exotic music which has been said to be reminiscent of that heard in the ancient temple of Solomon itself.

Mark the court out on the floor in a space of about 5m x 10m using masking tape, string, or paint (see diagram below). Also mark the names of the different court zones on the floor to reduce confusion. Spread the rattles/other instruments out in the Freemen part of the court. One person needs to act as the Grand High Wizard playing regular gong-downbeats during the game as well as giving guidance to anyone who is unsure as to which part of the court they should be in. A number of commonly recognised conducting gestures should be decided upon and taught to the players before game play as this will improve the musical results. 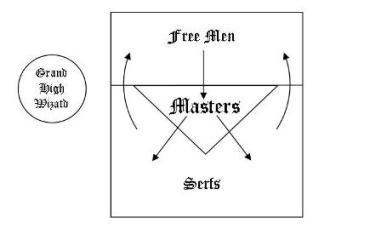 The game is played out on a court with players holding one of the three roles of masters, serfs, and freemen. On each of the Grand High Wizard’s regularly occurring gong-downbeats, players change roles in concurrence with the Masonic Code and move between sections of the court accordingly. The Grand High Wizard will decide upon a certain number of masters and serfs to begin the game by using the Ancient Table of Players and will signal the start using special gong-downbeat which also signals the end of game play.

Masters - Conduct the serfs. Keep conducting even if no serfs are following you! Don’t make any sounds.

Serfs - Obey a master using a kazoo. You must keep the same master until the next gong-downbeat but can change masters then if you wish. If there are no masters then remain silent.

Freemen - Play freely on the selection of fine instruments.

The Ancient Table of Players

For the use of the Grand High Wizard only

If you’re a master … (conductor)

Absorbing The Masonic Code and performing it correctly requires a fair amount of time and patience. Players should work together towards a perfect execution of this ritual through repeated practice and improvement.

Provided that The Masonic Code remains intact, all other aspects of the ritual are open to modification (e.g. adding new conducting gestures, substituting kazoos for other instruments etc.). Let me know about your version of The Freemasons by sending any documentation to info@halalkebab.co.uk.

A convenient handout to explain everything to the players.

{{#ev:youtube|IFXZiWkyR-o|300}}
Freemasons being played at Sandpit #2.

Freemasons was played at Sandpit #2 and Hide and Seek 2008.