In the rules below, Tablero de Yinzer is referred to simply as "Tablero." It should be noted that this is also the shortened name for Tablero da Gucci.

Seven shot glasses. One 7x7 chess board large enough to accommodate the shot glasses lined up in a horizontal row. One pair of dice (i.e. two six-sided die). Two bottles of quality beer.

Tablero is played on a 7x7 grid, with squares large enough to accommodate the shot glasses.

Two players play at a time. However, each player may choose to have a "second" accompany them and drink in their stead.

The objective of Tablero is to drink your opponent's beers while hording your own. To do this, players move shot glasses around the board, jumping empty shot glasses over full ones and drinking the jumped glass. To win a round, players must line all the empty glasses up in horizontal, vertical, or diagonal lines, or in a "short" or "long" chevron.

1. The game begins in a standard setup, as in the image below. Each player fills the three shot glasses closest to them half-way with their beer. The glass in the middle remains empty. 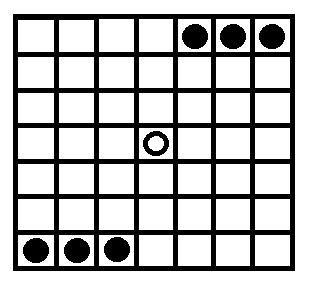 2. A woman is asked to roll the dice to choose the "Queen's Number" for the game. If there is no woman available, nose goes. The Queen's Number cannot be 7, 11, or 12.

3. Each player rolls one die to decide who goes first. High number wins.

7. An empty glass may jump over other glasses, but a full glass may not. If a full glass is jumped over, the glass must be drunk by the player who jumped over it, and then returned to its place on the board. A jump counts as one space, not two.

9. A player wins the round when he or she succeeds in making one of the formations shown in the handouts section, anywhere on the board (where applicable).

In some styles of play, all glasses must be empty before the formation counts.

10. When a player has won a round, his or her opponent must re-fill all but one of the glasses. The winning player may then arrange the glasses in a symmetrical formation of their choosing, provided that the empty glass is placed in the center of the board. Below are some examples of different starting formations.

Another round begins and the game continues until one player is no longer able to re-fill glasses. Note that it is not customary to win on a Queen's Number, and as such, if a Queen's Number is rolled and the opposing player is unable to fill a glass, the rolling player will fill one instead.

11. To begin a new game, re-set the glasses into the standard starting formation and select a new Queen's Number.