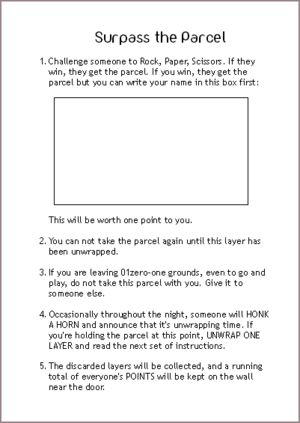 An ambient game of pass the parcel to be played at a larger party or gaming event, where the parcel moves around the venue in search of particular types of people.

Buy a decent-sized prize; a box of chocolates or larger. Wrap it in successive layers of paper as per standard Pass the Parcel (with a few sweets inside some of the layers, if you feel like it), but on the outside of each layer, attach a printed instruction sheet. An instruction sheet should take the following format, with a large, empty box between the first and second bullet points:-

The final layer of the parcel should be "Find somebody with more points than you.", and doesn't have a box for name scoring.

Release the parcel into the wild, with or without fanfare.

Every so often, sound a horn (or some other noise) and shout out to see where the parcel has got to. The current holder should unwrap it and hand you the removed instruction sheet; transfer the names onto the scoreboard, and continue the game until the final layer has been removed. Whoever removes the final layer gets the prize inside it.

Every layer of the package entitles the un-wrapper to a small prize (from the moderator), but disqualifies the un-wrapper from winning the big prize. This creates an incentive to pass the parcel to another player (a la "Hot Potato"), but offers a token reward for the disqualified players.