Speed Gardening Guerrilla (SGG) is a Guerrilla Gardening game. It is a short-term variant of the original Gardening Guerrilla. SGG is played in a number of rounds. Players score by planting and by stealing plants from their opponents. Players may drop in and out of the game at any time, thus the game can run for several days during an event.

The moderator specifies the number of rounds and the play area. The round time defaults to 24 hours. The play area should be large enough, so that players can act autonomously without necessarily running into the other players. However, encounters should be possible and players must be are able to discover and spy on each other.

The moderator also prepares a number of small plants / seedlings that are appropriate for the season and suitable for the planting sites that players might find in that area. Seeds are not recommended due to germination time.

Examples for robust plants suitable for frequent re-planting are:

Players who are present at the start of the game join one of three factions. You may give the factions funny names like:

The players should have access to a map of the game area and to the rules of the game.

Each faction is handed one initial plant. Players and plants are labelled according to their faction. They are given appropriate time (one hour suggested) to plant the first seedling within the game area.

The game then proceeds in rounds. During a round, a faction can make the following moves:

A faction plants their seedlings in one or more places ("planting spots") in the play area.

A planting spot should enable your plants to grow without mutual disturbance but be identifiable as one continuous location (i.e. not exceed, say, 1 - 2 meters in diameter for a couple of plants).

After planting, report the location to the moderator, who keeps a record of the number of players for each faction and a private map of the spots.

When a faction has planted the seedlings they currently possess they may ask the moderator for the next batch of seedlings (see #Plant distribution). Plants received from the moderator can either be added to an existing planting spot or used to open a new one.

A faction may relocate one of their planting spots at any time. All plants at a particular location (the planting spot) must be moved together, and planted in a single new location.

After moving a spot, report the new place to the moderator.

Take one plant from their opponents

Each time a faction has planted all the seedlings they have received, they may ask the moderator for a new set. The moderator supplies the remaining plants according to a Fibonacci-Series (1, 1, 2, 3, 5, 8, ...). This goes on until all plants are distributed. Each plant carries a label with the name/color of the faction that receives the plant.

Note: this scheme is to encourage speedy planting. You may chose different rules for distribution, e.g. giving out one plant at a time.

Players can join the game anytime. They are assigned to a faction when entering the game. Factions should keep an approximately equal number of members during the game. If somebody decides to stop playing, they may not re-enter the game afterwards.

After each round there is a Guerrilla meeting. While it is recommended that all players come together, each faction must send at least one representative to the meeting. Activities that take place in the meeting are: Scoring, discussion of the game and welcoming of new players.

The numbers are published immediately on the scoreboard.

Note: Due to the fluid nature of the game, some of these numbers might be estimates.

The winner of the game is determined during the final meeting.

The players also might want to tour the planting sites together and the moderator may award other prizes, such as: aesthetic criteria, ingenious planting spots, the most ecological faction, or the most creative guerrilla strategy.

The players within a faction should come to an agreement on the best strategy for choosing the number and locations of their planting locations, bearing in mind the scoring, the chance of being detected, etc.

A planting spot always consists of one or more plants marked in one color (indicating the owning faction) and zero ore more unmarked plants (stolen from other factions with their markers removed). There cannot be two different colors at one spot.

Avoid having only one planting spot, as you are stuck with it.

Players are allowed to:-

Players are not allowed to:-

Planting sites must be accessible to all players. (For example, seeds may not be planted in an enclosed space to which only certain players have a key.)

Each game move must be carried out in one action. For example, it is not permitted to excavate and temporarily store an opposing team's plant before replanting it. Another example: factions can only steal one plant at a time. After adding the plant however, they can visit the enemy plantation again to get the next plant.

Treat all plants, including enemy plants with respect. Avoid any negative impact on plants, soil and other facilities and inhabitants in the game area.

If players are in doubt about the application of these rules, they should talk to the moderator. The moderator may move plants or exclude players, as a result of rules being broken. The decision of the moderator is final.

This is an example for a game area: handout map for Playpublik Berlin. [[Media:]]

Medialab Prado as Solid Interfaces and Urban Games: Digital Games in the Public Spaces, Madrid 2013 (prototyping a mixed-reality version of the game)

Evolution of the Gardening Guerrila Games

Since the original Gardening_Guerrilla, the games have evolved quite a bit. This chart gives an overview: 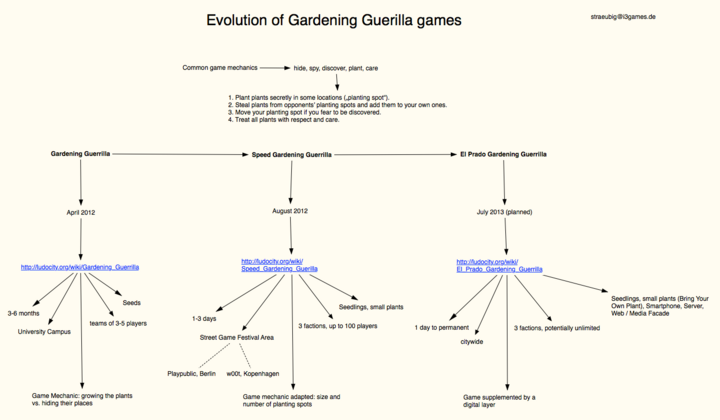