Soccer meets baseball meets human-sized pinball. Ever since I was a young man, I played that silverball...

Silverball was invented by Adam Nelson and members of Obscure Games Pittsburgh. It was first played in Mellon Park, Pittsburgh, on May 6, 2010. It is influenced by baseball, soccer, and pinball.

Silverball was also the winner of "Best New Sport" at the 2010 Come Out and Play Festival in Brooklyn, New York.

Silverball is played on a the side of hill. The terrain of the hill determines the location of "bumpers" (trees), and gates are spread randomly through the playing field. The bottom of the field is 18 feet wide, and the width of the top of the field can be up to 100 feet wide. The field is about 100 feet long from top to bottom. 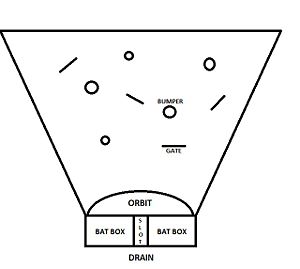 Two teams of 5-8 players each. 6 players per team is ideal.

Silverball is played over three innings, during which each team has a turn at offense and defense. On offense, each team has three credits (balls) to use. They may use these credits at any time (i.e., the team may have up to three balls in play at any time). The offensive team makes points by kicking the balls through the gates and off the bumpers, as well as using baseball bats to defend the drain and keep balls in play. The defensive team attempts to block and steal the balls and kick them through the drain, causing the credit to expire and the ball to be out of play. Once all credits are out, teams switch positions.

2. Flippers stand within the Bat Box and are the only players who may use bats.

3. Poppers and Knockers play on the field, using their feet to kick the ball, and hands to slap or dribble. Throwing and catching is not allowed.

4. Points are scored when a ball passes through a gate, or bounces off a bumper. Gates score 1000 points, and Bumpers 100 points. The ball must pass through a gate or bounce off of a bumper at or below waist level.

5. Flippers score a Jackpot of 3000 points by hitting the ball past the upper boundary of the field.

6. Game play does not stop after points are scored.

7. Knockers remove credits by kicking the ball through the Drain. Once a credit has expired a flipper "plunges" another ball by batting it into play. When three credits have been removed, teams switch positions.

8. At the beginning of each round, the offensive team begins with three credits (balls) that they may use at any time. Consequently, at any point during the round a flipper may plunge one or two additional balls into play, creating a multiball game. Once plunged, the balls must remain in play until they are expired by the defensive team (by kicking them through the drain). Expired balls may not be brought back into play.

Tilts and other Faults

10. A Full Tilt is a fault committed by one of the flippers, which occurs when a ball is batted out of play (i.e. when a ball is stuck or hit in such a way that the game is delayed). When a Full Tilt is committed, a credit expires and a new ball must be plunged into play.

11. An Orbit Fault occurs when a player enters the Orbit to make the following actions:

In each of the cases above, the team who commits the Orbit Fault loses 1000 points.

12. The game ends after 3 innings (a period of 2 rounds, during which each team plays offense and defense). The team with the most points wins. If already in the lead after the penultimate round, the final offensive team may elect not to play the final round.

A PDF of the Silverball Rules, to hand out.