Hold your breath and dive down into the depths of the underpass, work in teams and use submarines to explore even further. You will meet dolphins and mermaids, avoid dangerous sharks and reach underwater realms that you weren’t even aware existed. Scuba gear will be provided. Oh, and don’t forget to rescue the little turtle.

You need several non-player characters to run the game: 1 Mermaid, 2 Submarines, 1 Fortune Teller, 1 Deep Sea Diving Station Operator, 1 Poseidon. It is also good to have 1 Shark and 1 Dolphin to start out with.

{{#ev:youtube|cUvLYOIGwdI|300}}
Watch this instructable video to get started! 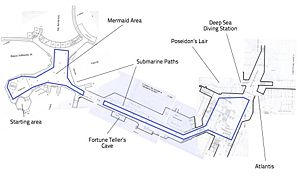 Map of Nyugati Underpass with game locations (do not hand out to players!) 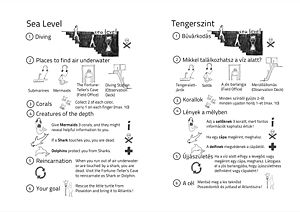 Rulecard for Sea Level (hand this out to players!)

When explaining the game, be careful to give the players only the information they need to get started (see the rule card). Players learn everything else during the game from the Non-Player-Characters. Don't make the competitive aspect of the game too strong during the explanation, it is much more about the imaginary experience and the journey.

(These are the ten most recent Flickr photos of Sea Level. To add your own, just add the "ludocity:game=sealevel" tag to your Flickr photos.)

Sea Level was created in 2011 as part of the Nyugati Game Set by Invisible Playground, working out of Field Office Budapest at PLACCC Festival.