Regulator Rally is a race in which you move an object from A to B. Because the object cannot be touched, players need to create additional rules to allow them to achieve their goal. The game is partially inspired by nomic.

The game is played with 3-5 teams, each consisting of 2-4 players. Give each team a number.

The goal of the game is to race your object to the finish line (any object will do, we used wooden cubes). The only set rule of the game is that you cannot touch the object. Set out a route through the city, picking a start and a finish. Anywhere between 500 meters and 3 km will do, depending on how long you want to play. You can always pick another finish in-game.

The game is played in rounds, at the start of each round every team creates one rules card. These cards describe a rule that allows players to either move the object or sabotage the other teams. Each card will be used by each team at the same time, so think carefully! The cards are usually made up out of a title, an illustration, and the rule. 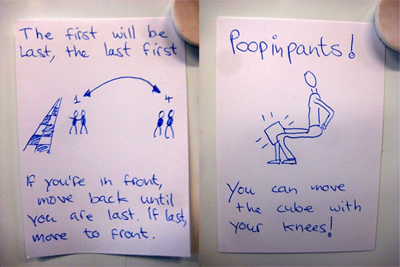 Make a copy of the card for every team and mark them with your team number.

The team now in first place receives four points, second place receives two points, third place gets one point. To ensure the game remains ‘all to play for’, bonus points can be rewarded for random achievements. After all, it’s about having fun, not winning. Once the points are awarded all teams will move up to the team in 1st position where the next round will commence. Take some time to create new cards and start the new round. Rinse and repeat until the finish is reached.

Video footage of the game as played by Hubbub: