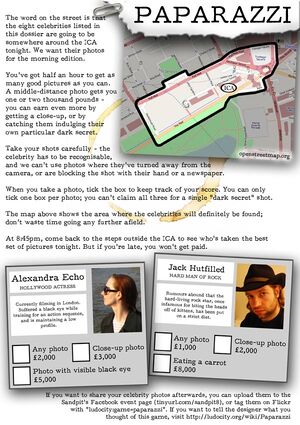 Handout from the ICA performance of the game. (See also the reverse.) 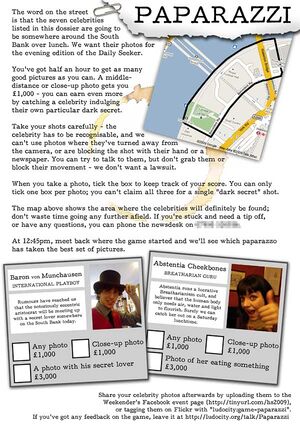 Handout from the 2009 Hide&Seek Weekender. (Again; the reverse.)

Stalk celebrities through the city streets, and try to catch them indulging their terrible secrets. Don't worry, it's all in the public interest.

To run this game, you'll need a handful of assistants to act as celebrities. Each of them should have an identifiable "look", from whatever costume props you or your friends can provide - dark glasses, hats, scarves, wigs, etc. They can be parodies of existing celebrities, or just have random, distinct styles.

Prepare a single-sheet dossier handout of the celebrities. Each celebrity should have:-

The dossier should also have a clearly-bounded map of the playing area, so that the players don't wander too far in their search for celebrities.

Tell your assistants to wander around the playing area for the duration of the game, making sure to perform their terrible secret as the mood takes them. If they spot someone trying to take a photo of them, they should avoid being caught on film (holding a hand out to block the shot, ducking away, walking down a different street) and should drop their terrible secret if caught in the middle of it.

Being stalked by even fake paparazzi can be genuinely stressful - reassure your actors that if they're feeling uncomfortable, they can choose to leave the playing area (perhaps hailing a cab or jumping on a bus) and either return later, or sit the rest of the game out, without harming the experience.

You are a group of paparazzi photographers. In your hands you have a dossier of celebrities who are expected to be passing through this area of the city today - it's your job to spot them and take some good pictures of them.

A good photo is one that's clear and unblurred, where we feel that the celebrity is clearly identifiable, and where there aren't any other paparazzi visible in the shot. This will be entirely a judgment call on our part, so get the best photos you can.

We'll be paying £1,000 for a good, middle-distance photo of the celebrity, where their whole body is in shot. For a close-up of their head and shoulders, we'll pay another £1,000. And if you manage to catch any of the celebrities indulging their terrible secrets (which are listed on your dossier), we'll pay you £3,000. We'll only pay you once for each type of photo for each celebrity - so you can make at most £5,000 from a single target, if you get each type of photo of them.

Meet back here in half an hour to review your photos. Whoever makes the most money is the winner.

When the players return at the end of the game, have them work out their own scores, and announce their total income. When you've got a winner, check their photos to see whether they're up to scratch. Your judgment is final as to whether a picture is a "good" one - a shot with the celebrity's hand in front of the camera might be unusable, or it might be a great candid shot, it's your call. If a photo happens to have multiple celebrities in (perhaps you could even set this up, by having some of the terrible secrets involve specific other celebrities), it scores for each.

Total up the scores and announce them. For a permanent record of the day's events, encourage the players to upload the pictures to a Flickr or Facebook group or something, or email them to you, after the game.

Give the players your mobile phone number, and invite them to phone the "newsdesk" during the game if they want a clue. You should also tell your actors to give you a call and tell you where they are, if they haven't been spotted for a while. When a player calls in, you can mention something you've heard from the celebrities. (If you didn't get in-costume photos of the actors, you can also give out clues about what they're wearing, at this point.)

If all the players have high-tech cameraphones, you can have them dial their work in on the fly, or post it to Twitter, and have the scores ready when they return at the end.

(These are the ten most recent Flickr photos of Paparazzi. To add your own, just add the "ludocity:game=paparazzi" tag to your Flickr photos.)

Paparazzi ran for the first time in February 2009 at Sandpit #8, on the streets around the ICA and Trafalgar Square, and again at the 2009 Hide&Seek Weekender.

(This game has no connection to the game of the same name that ran at the 2009 Come Out and Play festival.)