Our Friend The Golem

Bakers and Emperors compete for goods as they pursue their commercial activities. Thieves are lurking around and make affairs more complicated. At the same time the Bakers or the Emperors can get some help: if they are in the possession of the right spell, they may call the Golem their friend. But beware of the duration the spell is effective: players better be far away by the time the spell loses its effect on the Golem...

You need at least three non-player characters: the Golem, the Golem's Shadow, and the Doctor. Two helpers to watch the items in the field are also very helpful. 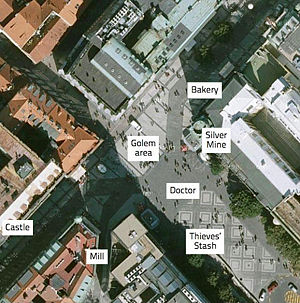 Overview of the playing field in the north-east corner of Václavské náměstí, Prague

There are several important points on the playing field: The Emperors' Castle and their Silver Mine, the Bakery and the Mill, the Doctor and the Thieves' Stash. The Golem starts in the center but moves about freely. 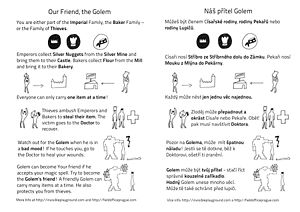 The rulecard for Our Friend The Golem in English and Czech.

(These are the ten most recent Flickr photos of Our Friend The Golem. To add your own, just add the "ludocity:game=ourfriendthegolem" tag to your Flickr photos.)

Our Friend, The Golem was created in 2011 as part of the Narodni Game Set by Invisible Playground, working out of Field Office Prague at 4+4 Days in Motion Festival.

Other games from the Narodni Game Set