The garden is full of poetry. Yet it is thoroughly hidden and has to be brought to light. With special devices Squads spread out in the garden, leaving glowing poetry lines on their trails and filling the air with conspirative whisper. Will any of the teams be able to save a complete poem?

Poems for Lost Poetry Squad (do not hand out to players!) 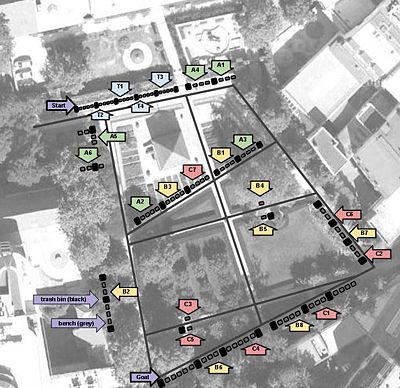 Map for Lost Poetry Squad (use it to prepare the benches). The rule for lines is "always under benches on the right side of a trash bin". 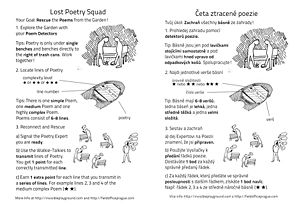 The goal of the game is to rescue as many poem lines hidden under the benches as possible. To rescue them players will have to find them, read them and broadcast them to the poetry expert through the walkie-talkie. The team scores 1 point when a poem line is transmitted correctly to the poetry expert. There is a bonus point for each line that was transmitted along with other successive line in the correct order. For one line the team can cash in the point and the bonus point only once in one play session. If the team already has earned a point with a poem line, a second transmission of the line won't earn them a plain point, but could still earn them the bonus point if transmitted along with other points.

(These are the ten most recent Flickr photos of Lost Poetry Squad. To add your own, just add the "ludocity:game=lostpoetrysquad" tag to your Flickr photos.)

Other games from the Národní Game Set