An isolated country mansion, with the telephone lines down, the fog closing in, and each and every guest having a well-founded grudge against another. Who will survive the night? 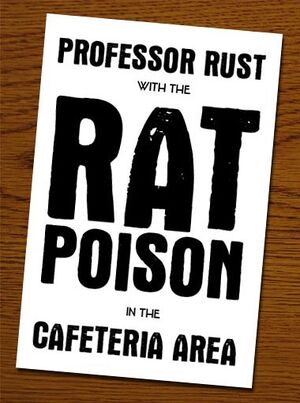 For each player, prepare two props:-

For the locations, you should scout out the area you're intending to run the game in, and pick at least three large, easily-described areas. (If you were running the game in a two-level building with a bar, you might divide it into "Upper Floor", "Lower Floor", "Bar", "Outside".) The areas should be unambiguous, and should be parts of the venue that players are likely to spend at least some of their time passing through in the course of events.

Optionally, you can summarise the instructions of the game on the back of each murder card, for players' reference.

Put each new sticker/card pair into an envelope.

Make a "murder board" - a sheet of paper or card large enough to accommodate all of the murder cards. It should have a card-sized rectangle for each character, with their name printed inside, but you can just use a blank sheet of paper if you don't have time. Keep a wodge of blu-tack or some pins next to it, either way.

Assemble the players and give each of them an envelope (either at random, or write character names on the outside and let people pick their own). They can open them straight away.

Each player now has a name sticker, and a "murder card" that specifies a player they have a grudge against. The sticker should be worn openly on the player's clothing, from the start of the game, but the murder card should be kept secret.

To kill the target given on their murder card, a player simply has to approach that player in the location specified on the murder card, and greet the player by their character name, revealing the card as they do so. This kills the target instantly.

When a target has been killed, both players swap murder cards. The dead player must return to the murder board and blu-tack their card to it, to show that they have been killed; the murderer now has a new target, and a shiny new weapon to kill them with.

Players are free to show their cards to one another, but may not trade cards outside of a murder situation. (Swapping cards could result in a player getting hold of the murder card with their name on it, and becoming invulnerable.)

The game doesn't start immediately - give the players a time at which the murdering may commence, to give them a chance to spread out and split up. (If you're running the game as part of a larger event, this cooling off period can be as long as you like - making it half an hour to an hour will give people long enough to forget the game a little and become careless.)

The game continues until only one player survives, or until a pre-agreed "end of game" time limit is reached (in which case all surviving players share the victory).

This game can also be run ambiently, by gradually handing out envelopes over the course of the evening, with an instruction sheet inside. Try to make sure that all of the envelopes have been given out before the time at which players can start killing one another.

Additionally, make it clear to players that if they want to stop playing or leave early, they must (if they're still alive) give their card and sticker to someone else. The game will break (or, at least, someone will get an easy win) if a player leaves taking their murder card with them.

Brendan Adkins ran the game in July 2011, and it seemed to work. This guy won.