Keep your friends close and your enemies closer.

You're a cabinet minister in a flailing incumbent government run by a beleaguered PM with rumors circulating of Machiavellian goings on. The economy is bust, opinion poll ratings are at an all time low and still the bad news keeps on pouring in. You and your fellow ministers are gathered at number 10 for an emergency meeting of the cabinet and you could cut the atmosphere with a knife. Some are after the top job, all are trying to save their necks. You must keep your friends close and your enemies closer.

At the start of the game each player is randomly assigned one of eight ministerial posts ranging from Prime Minister to Arts and Culture Minister. Players also choose their political name and write it onto their badge; this could be their own name, the name of a well known politician, or any other name they so choose. Whilst their ministerial post is bound to change during the game, their political name will always remain the same. Ministers should sit round the cabinet table in the order shown below with their ministerial place markers clearly visible to all. Every player should have a cabinet office guide and the PM should sit at the head of the table with the pile of news cards. 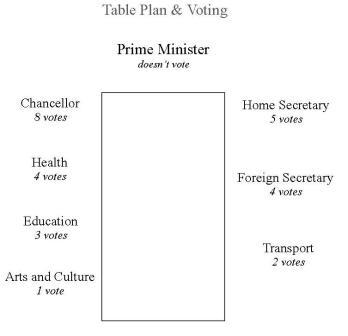 The game is played in 12 cabinet meetings. At the start of a meeting the PM picks a hand of eight news cards from the deck. A good news card is worth between 10 and 80 popularity points whilst a bad news card is worth between -10 and -80 popularity points. The PM must address the cabinet, publicly handing out one card to each minister including himself and declaring the point value of each card. On handing out each card the PM may elaborate on the situation written on the card, filling in the blanks as they choose. If it is bad news that minister must face the media and take responsibility for what ever government blunder or scandal is on the card, hence losing popularity points, if it is good news the minister may collect the credit for the government's good work and hence gain popularity points. Each minister must lay their cards clearly on the table in front of them at all times so that players can keep track of everyone's scores.

Votes of no confidence

After handing out the news cards the PM opens the meeting to any other business at which point the other players can plot and raise a vote of no confidence. This is highly likely to happen! The minister who officially raises the vote must recommend a minister other than themselves to become the new Prime Minister. Before the vote Prime Minister is given the opportunity to make his case to the cabinet. All ministers with the exception of the PM must vote - abstentions are not allowed. However, each of the 7 ministers has a voting power that accords to the rank of their ministerial post (shown on the table plan above).

Following a successful vote of no confidence the new PM may reshuffle his cabinet before the start of the next cabinet meeting. All players should move to the appropriate seat for their new role, placing their score cards in front of them. Each PM is permitted one extra reshuffle which can only be used before the start of a meeting. If the vote is unsuccessful the cabinet meeting is drawn to a close. Only one vote of no confidence is allowed per meeting. At the end of the twelfth meeting the popularity points are totaled and the most popular, or least unpopular politician is declared the winner.

Notes for the Game Runner

Preparation simply involves printing off and cutting out the news cards, name places and cabinet office guides. Postage labels are good for political name badges. To add more atmosphere try a blue table cloth, whiskey tumblers, and jugs of water. Bring a camera and insist on taking a happy photo of the new cabinet after each reshuffle. Encourage Prime Ministers in their elaboration on the basic information given on the news cards as they address their cabinet.

Other than explaining the rules, the game runner's principal role is time management. Try to prevent A.O.B discussions from dragging on too long. The PM's defense is the final words that can be said before a vote, no retorts are allowed. If necessary threaten spontaneous demotions for unruly players.