This game is part of the Playmakers project, and is a variant of Test Case (Playmakers 01) with added treachery. It takes place in 1984 - but which 1984, the book version, the historical version, or the one we're living in now, the game isn't quite sure......

The Ministerial information Gatherer takes the following form. A metal trolley armed with the highest - tech mobile technology from 1984... A JVC VHS Camcorder, a dot matrix printer, a state of the art mobile phone (only 4.5kg!) and a box of essentials. 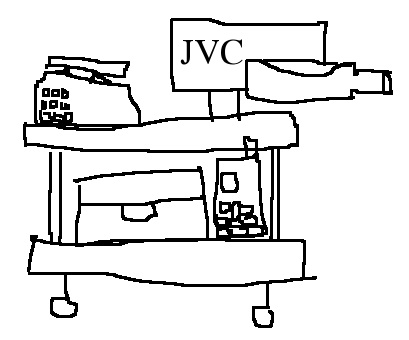 Your team will be given a handout with a map of the surrounding area. Your task is to find suitable materials for a new Informational Film for your Ministry. Indications of a selection of targets are listed in the documentation supplied with your MIG. They will include: posters expressing support for the Ministry's aims; key activities performed by members of the public in favour of the Ministry's aims (including waving, smilling, cheering); Ministerial speeches to be recorded by the team on camera in suitably inspiring locations.

Each MIG comes supplied with a range of lighting, special effects, makeup and costume to make your Informational Video. The Ministries Like Yuppies. They dislike Miners. Choose your outfits well.

The Ministries reward Vigilance. Visual records of other Ministries loitering, chit-chatting or behaving in an UnMinisterial Manner will be rewarded accordingly.

Carefully co-ordinated aides will ensure all the Ministries start recording simultaneously. You will record continuously throughout the mission.

Complete as many of your Ministerial Tasks as possible in the time. And then return to the Governmental Complex for scoring and the election.

(These points are not cumulative - you don’t get extra points for having three film members on screen, or a film member and the tripod/camera)

This game ran as Test Case at Sandpit #9 in the Barbican, and as Shrine at Sandpit #10 outside the ICA. This is a proposed version for the Sandpit #13 at the Southbank Centre.