This is a page to list common props and their uses (like ribbons), and items which are less well known but could prove useful in putting together a game (such as toys and technical gimmicks like UV pens). 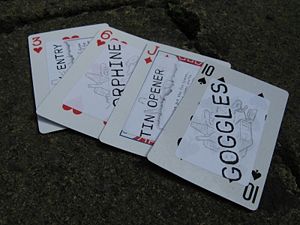 If your game requires cards, an easy way to make them is to print stickers and then stick them onto a normal deck of playing cards. Avery Template L7160 address labels (64mmx38mm) are a good size - you can buy 525 stickers for about £7 ($10USD).

You can also put stickers onto blank playing cards - these look a bit more professional, and reduce the chance of confusing players, who might assume the card values are somehow relevant to something. We've seen them available at £2 ($3.50USD) for 200 here, which actually work out cheaper than normal playing cards (and much cheaper if you order in bulk).

Hats can be great for establishing a moderator as an authority figure, and making them easy to find if players are dispersing and reassembling (a beret = artist/secret agent, a bowler hat = businessman, a top hat = toff, etc).

Hats can also serve as team markers, instead of, say, ribbons or sports bibs - if you need a lot of them, party shops often sell cone-shaped hats in a variety of colours relatively affordably. 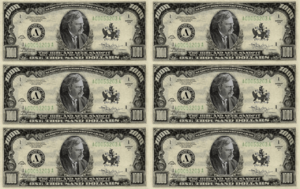 Monopoly money makes an inexpensive substitute for real money, and can be downloaded in printable form from Hasbro. You're also welcome to use the Chesterton-branded Sandpit money we use at the Sandpit (primarily for games of Standoff).

Printing on coloured paper looks much better than white paper, if you've got some.

Looped ribbons are a cheap and easy way to denote teams, or to help players recognise one another. They're visible at a distance, relatively inconspicuous to non-players, and if they're tied to an arm or around the head, other players can spot them from any direction. Satin acetate ribbon - the slightly nasty fabric ribbons used by florists - seems to be cheapest, in terms of the amount of decently thick ribbon you get per dollar.

If you're running multiple iterations of a game, it can be a good idea to use different coloured ribbons for each round, as some of the earlier players might lounge around wearing their ribbons beyond the end of their game.

Printable stickers are great if you need to give your players wearable identities, or to help them recognise each another (although ribbons are usually preferable, if you only need to convey "this is a player" or "this player is on the red team").

Stickers can also be good as a simple way to "ticket" your game if you have no other props - if your game only works with 20 players, you can bring along 20 wearable stickers so that everyone knows that when they've run out, the game is full.

If players will be trading some kind of token, there are a lot of options available. Marbles and round beads are fiddly and bounce away if dropped, which can be awkward; but poker chips are good, as are floristry pebbles.

To make a passable 'ancient' or 'antique' document, just burn/fold/tear the edges a bit, then wipe a used teabag over it and pop it into the oven at 50-100°C until dry. Do any tearing first to avoid tell-tale white edges.

To make an authentic bloody handprint, ask your butcher to give you a quid's worth of liver in a plastic bag, keeping it as bloody as possible. Wash your hands, squeeze the liver, then make the print. Don't forget to put the liver in the fridge to have for dinner when you're done.

Infra-red light sources (like IR diodes, a "laser-tag" gun or an old remote control) are not visible to the naked eye, but will show up on cameras. You can get remote control helicopters and tanks which have infrared "guns" and can register incoming IR "shots".

Most players will have their own mobile phones, although be aware that not everyone will be willing or able to make dozens of calls or text messages, and some players may not have enough battery to last the whole game. You should also check reception in the venue if your game relies on the players using their phones.

Provide a whiteboard for a team to exchange numbers, and they have their own comms net. (In most cases, the person with the cheapest call plan and flashiest phone will be happy to become a hub for rebroadcasting information.)

Very basic pre-pay mobile phones are surprisingly cheap nowadays - you can pick them up for £20 in the UK, or even less with a mandatory credit top-up. Smaller, dodgier stores can sell you unlocked handsets (or unlock an existing phone) so that you can replace the SIM.

Some operators provide free SIMs which give you a new number at no cost, which can be an easy way to set up a helpline for the players, or to give them a mystery phone that you can ring them on mid-game. You'll need an unlocked phone, though, or one that matches the SIM card provider. (We've tested out 3 Mobile's offer, and the new sim can receive calls and text messages on its number as soon as it's in your phone, without any need to top up or pay anything, although they reserve the right to cancel your card if you haven't topped it up in the past six months. This may mean they'll just kill it if you seem to be using it for free incoming calls; this needs further research. Minimum top up, from a standing start, is a ten pound "card verification fee".)

They seem to use infrared sensors with an integrated infrared torch, like these binoculars

Presumably they could see IR LEDs.

There are indoor remote control helicopters which use infrared to send commands (£12 up), and indoor/outdoor copters which use radio control with a longer range (£50). These both have very short flight times before needing a recharge, but the charging cycle is fairly short.

There are also indoor r/c blimps.

UV pens have ink which is only visible under UV light. They are probably available free from your local law enforcers (for marking your property to aid recovery if it is stolen). You can get UV or 'blacklight' lightbulbs, torches (used for examining stamps or currency), and LED keyring dealies - these are available at electronics/hobby stores.

Secret agent pens are toy sets of two pens, one which writes invisibly, and one which makes the writing from the first pen visible when you scribble over the invisible message. Usefully, the ink in the invisible pen may also be revealed under UV light.

There are voice changer toys shaped like loudhailers which both amplify and change your voice to give a Dalek/alien type effect (some of them offer a variety of effects). They're mostly not very good if you want a large number of people to be able to understand what you're saying, though.

You can also get smaller voice changers designed to be held over a telephone mouthpiece.

Walkie-talkies can be useful both for organising games (if you have a few dispersed moderators who'll need to be in touch a lot, or if you're running a Sandpit type event where some of the games are taking place a short distance away), and for playing them (such as Scotland Yard and Schniper). You can pick up a pair of cheap, family-holiday style walkie talkies for around $30 - we've used the Motorola TLKR 3, which was fine for a game of Schniper in the park, and stretched across the Thames for a line-of-sight game of Binohunt.

Be aware that a heavy urban environment will strongly affect the walkie talkie range. If you're running a game that uses them, scout out the area beforehand to make sure that reception is strong in all relevant areas (or adjust the game to deal with blind spots - Schniper has "must have clear line of sight" built into it, to withstand urban environments).

If you're playing in a public space (particularly a park or beach), you might overlap with other people who are using the same frequencies. Carry the walkie-talkies around for a while before playing, if possible, to see if you pick anything up.

The airzooka is a device which fires a ball of air, and could be used as a harmless "gun", or to blow out candles from concealment to create an eerie effect in a horror game...

Water pistols are pretty handy both for being cheap and readily available, and for being brightly coloured and widely recognised as toys - they're therefore unlikely to worry members of the public.

There's a water pistol that has a flexible nozzle to shoot round corners, with a mirror to see what you're shooting: Aps Super Cobra Flex Water Gun - £15 well spent!