A Tiny Urban Game about inhabiting high value micro-properties with your figures and shunting gray figures onto properties with lower values. After occupying a property, use your body to protect your own kind from the endless stream of people. A game of power, sadness and fun – all of which lie close together at Nyugati, Budapest, where homeless people are moved from one place to another by security in a never ending choreography.

{{#ev:youtube|dau7zLhxFU0|300}}
Watch this instructable video to get started!

To prepare the playing field, use chalk (see Level Design). The main equipment you need during the game are small playing figures you use for board games like Mensch ärgere dich nicht. Use primary colors like green and red for the teams. Additionally you need gray figures that are hard to find - you'll probably have to paint some colored figures gray. Depending on the level design (see below), you need around 20 figures of each color (including gray). For each team color, you also need one larger figure representing the King.

The game works with 2-4 teams consisting of 2-6 people. It is very helpful if players carry their figures in transparent plastic cups and distribute them evenly inside the team at the start of the game. Teams communicate amongst each other and with the referee through walkie-talkies. Set the walkie-talkies to a different channel for each team. Not every player in a team needs a walkie-talkie. If you don't have enough walkie-talkies, make sure that players with walkie-talkies are not also carrying the playing figures, so that no one is left out.

The referee needs a timer, a walkie-talkie set to each of the teams channels and a clipboard for counting the points in the end.

Use an urban pedestrian area with lots of pedestrians. You should be able to cross the playing field in not more than 2 minutes. Mark out property zones with chalk. Each zone should have a value of either 20, 30 or 50 points. Place the higher valued zones either in rather hard to find places or in places with higher pedestrian traffic and thus are harder to protect.

Just before the game starts, distribute the Gray Figures semi-randomly throughout the zones. You can give the game more edge if you place more Gray Figures in the zones that are hidden and have high values. 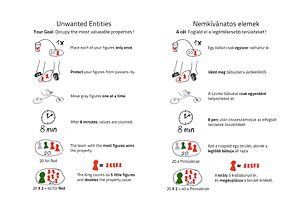 The rulecard for Unwanted Entities in English and Hungarian.

Every Team has one special figure, represented by a larger game piece: The King. The King counts as 5 little figures and doubles the value of the zone it is placed in. For example, if there is a red King and three green figures on a zone valued 50 - red earns 100 points. If there are six red figures and a green King on a zone valued 30, read earns 60 points. If two teams place their King on one zone, the value is doubled only once.

The referee and her helpers can celebrate the counting of points by doing a procession from property to property, collecting the figures and announcing the points through walkie-talkies. It is also very nice to have some music to go along with the procession.

(These are the ten most recent Flickr photos of Unwanted Entities. To add your own, just add the "ludocity:game=unwantedentities" tag to your Flickr photos.)

Unwanted Entities was created in 2011 as part of the Nyugati Game Set by Invisible Playground, working out of Field Office Budapest at PLACCC Festival.

We have also played a variant of this mechanic as Tiny Urban Game without Gray Figures and on traffic islands with a system of traffic lights in place. Only one team is allowed on each island at a time and you are only allowed to cross the street at a green light, so that you have to use the traffic lights pattern strategically.