A game about faith in a community and the few sneaky ones who think that they are more important than the other.

Prepare tokens for the players. Tokens in three colors are needed: green, red, silver. Following amount of token in each color is needed: players number * 10. It comes handy to hand out small plastic bags for the players where they can keep the tokens they get - just like a purse.

It is helpful for village managers to have the script for the events in the village printed out.

Village managers should have a camera on them. 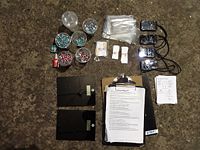 All props for the game

- Let‘s start try out the first scene: „The founding ritual of our village“.
- Every scene starts with a dance. Start to dance! Keep dancing!
- Ok, now enact the scene. You 10 seconds!
- 3, 2, 1 click.
- Very good! The light stayed green (or mostly).
- You would now get green tokens.

- Although the light stayed green, there is always the danger of a VIP hidden in everyone of us. That is why after each scene, we choose one person to send to the next village.
- Stand in a circle and point to the person who should leave.
- This person get‘s a silver token and goes to the next village.

- But this was only one way the scene could play out.
- Now imagine you are all secretly VIPs. Your goal is to sneak into the center of attention and make the light turn red. But remember, you do not want the other villagers to know this.
- Let‘s enact the scene again: „The founding ritual of the village“
- Start to dance! Keep going
- Ok now enact the scene.
- „Oh! Someone thought they were better than us and sneaked intot the center.“
- Determine who it was by pointing.
- I will now reveal the consequences of the VIPs actions: „While everyone was preparing the founding ritual, the architect (you) built a statue of himself right in the center of the village.
- Enact this scene now for the photo. 3, 2, 1 click.
- Very good. Now everyone gets red tokens.
- And you (the one who was chosen) get‘s a sliver token and goes to the next village.

- You are now ready to find out if you are a Caring Member of Society or a Very Important Person. (dsitribute cards)

- Ok. Are you ready? Let‘s get started with the first real scene.

SCENE OF THE VILLAGES - LIVE

1. You're not to think you are anything special.
GREEN: The founding ceremony of the village
RED: VIP architect made a statue of himself in the main square

2. You're not to think you are as good as us.
GREEN: A child is born
RED: VIP mother doesn’t send her child to the village school and does home schooling. The child never learns to spell.

3. You're not to think you are smarter than us.
GREEN: the barn is on fire
RED: VIP smartass opens up the nearby damn and floods the whole village.

4. You're not to convince yourself that you are better than us.
GREEN: funeral of the baker
RED: He never shared his delicious cakes and always ate them in secret. No one came to his funeral.

5. You're not to think you know more than us.
GREEN: bringing in the harvest
RED: VIP smartass told all the farmers to wait for the weather to change. but it didn’t.

6. You're not to think you are more important than us.
GREEN: movie theater is openend
RED: VIP takes up whole theater (no one else is allowed in).

7. You're not to think you are good at anything.
GREEN: art festival
RED: pretentious VIP artist is ignored by the audience

8. You're not to laugh at us.
GREEN: voting day! a new mayor is being elected
RED: VIP candidate jokes about local football team and the other candidate gets 100% of the votes.

9. You're not to think anyone cares about you.
GREEN: a specialized medial center has opened
RED: VIP is only a little bit sick but all his organs are transferred to 20 other patients.

10. You're not to think you can teach us anything.
GREEN: university is opened
RED: VIP is the only one that shows up at the university. All the others dont think that they are not good enough.

The Game of Jante is physically connected to car lights in a parking lot. Normally these lights are used to indicate whether or not a single parking lot space is occupied or not. This game have hacked the use of the sensors and only works in spatial settings where these sensored light exist. Your chosen playing field must therefore be a parking lot with light sensors. 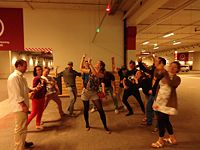 The players are introduced to the game by one of the village managers. The players are split into teams with approximately 4-6 people in a team - this will be their fellow villagers. Players get their role by drawing from a bowl: they can be either:
- Caring Member of Society (CMS) - Very Important Person (VIP)

To each village a non player Village Manager is assigned.

The teams enter the parking house and the Village Manager is choosing a parking lot that will be the village for his/her team. The villages should be not far from each other and should be laid out in a way that villagers can rotate in one direction to the neighbor village.

Village Managers communicate when every village is ready. If so, Village Managers let the players choose a 'village dance' which practically an individual way of moving in a circle within the boundaries of the parking lot. After the team has established a village dance, the Village Manager does the tutorial with the villagers (see above). After the tutorial Village Managers start to guide through players to the villages life. The life of a village is constituted by scenes described above. Each scene has two possible outcome: a green option and a red option. The sensor triggered light above the parking lot determines the outcome of each scene, depending on whether it stays green or it turns red.


Village Managers guide villagers through this cycle. They need to try to keep all the villages synchronized.

After some rounds two neighbor villages fuse to a small town. After that they live the lives of the small town with the guidance of their Village Manager. The life to the small town follows the same scheme as described above.

After some rounds two neighbor towns fuse into one big metropolis, living the life of a metropolis with the guidance of the Village Manager.

In the end tokens are counted... 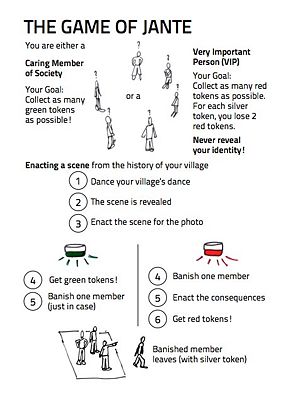 (These are the ten most recent Flickr photos of Tuesdaymorningjante. To add your own, just add the "ludocity:game=jante" tag to your Flickr photos.)

Eavesdropping on passers-by, we overheard a group of people talking about »Janteloven«. The Law of Jante is a set of rules portraying village life, originating in the 1933 novel »A fugitive crosses his tracks« by Aksel Sandemose. Apparently, every Person in Denmark knows what these rules are about. If you think about the kind of society that the »global village« has become today, they take on a new meaning.