Prepare a category list for each player - this should be a list of ten or so categories (such as: food, a city, a person's name, an animal), which the players will try to find words to fit. It's a bit more fun if you can work this into a fill-in-the-blanks story ("A person called [NAME] travelled to [CITY OR TOWN]..."), which also removes player uncertainty over what forms of words are allowed, but a flat list is fine.

If you've got the resources, give every player a handful of Scrabble tiles, or equivalent lettered objects - it needn't be a full alphabet, five or six should give a good balance of freedom and challenge. Leave out the "S" tiles to avoid having to clarify whether easy plurals are allowed, and the Qs and Zs so that no unlucky player gets them, and you'll be able to get a dozen three-consonant-and-two-vowels sets from a charity shop Scrabble set.

(If you're on a low budget, you can just give people pens, and a number of cardboard squares equal to half the number of categories. And if you're playing this on an unprepared whim, players can just write letters on scraps of paper, or their fingers. Or note the letters across the top of the page and don't use cameras at all, just have players note down the before-and-after words they found.)

Hand out the lists and tiles, agree on when the game will end. Around three minutes per category (so half an hour if you're using the attached handout) seems to be about right. 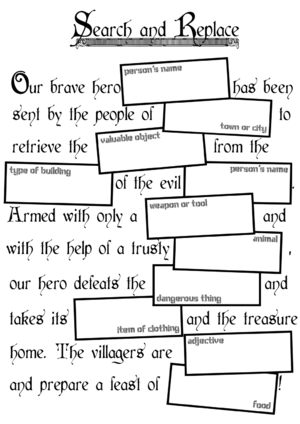