Difference between revisions of "Lose the Tail"

A two-player sneaking-and-tailing game that can be played in any urban environment.

(This game was originally designed as a two-zone tag game in 2008, but this simpler variant occurred to me in 2015, and I think deserves to become the main one.)

All you need to play this game is an agreed "safe zone". This zone should be a good couple of hundred metres in radius, have very clearly defined edges, contain a lot of scenery to obscure players' views, and have two or three exit points. (If there are more than three possible exits, players should agree on three "legal" exits and declare the others out of bounds.)

Pick one player to be the Quarry and one to be the Tail. Both players start together somewhere in the safe zone. The Quarry is aiming to leave the zone, within a certain time limit, without the Tail following them out.

While the Quarry is still inside the safe zone, the Tail is free to follow them around, waiting for them to leave. A good Tail will try to avoid being seen, so that the Quarry mistakenly thinks that they've shaken them off, and leaves the zone.

The game ends shortly after the Quarry leaves the safe zone. If the Tail emerges from the same exit within twenty seconds (ie. they saw them leave and were able to catch up) then the Quarry loses, otherwise the Quarry wins and phones the Tail to tell them as much.

If the Quarry has not left the safe zone within a pre-agreed time limit (say twenty minutes), most likely because they haven't been able to shake the Tail at all, then the Tail wins. 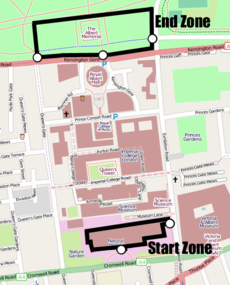 The original 2008 game used two safe zones - one to start in, and one to end in. These should be at least five hundred metres apart, and otherwise meet all criteria of the basic game's safe zone.

Quarry and Tail start together somewhere in the start zone. The Quarry has to reach the end zone, within a certain time limit, and without the Tail tagging them.

If the Tail catches and tags the Quarry outside of the safe zones, or if the Quarry has not left the start zone within a pre-agreed time period, the Tail wins the game. If the Quarry makes it to the end zone before the time is up, then the Quarry wins.

If both players have mobile phones, then the Quarry can announce their victory as soon as they set foot in the end zone, so that the Tail isn't prowling around pointlessly for the rest of the game.

Optionally, the Tail can be allowed a single "satellite trace" phonecall to the Quarry, during the game, to ask them where they are. The Quarry should give their exact location, and must be honest.

A variant we tried out at the BFI Sandpit was to play the game with only one safe zone, and an objective that requires the Quarry to sneak to a specific location outside the zone, and back again. We ran it with a secret-agent actor that the Quarry had to rendezvous with outside the safe zone, but it could also be played by collecting an object from a specific but large location (a flyer from a large museum, a napkin from one of a chain of cafes), or snapping a photo of an agreed landmark. This variant possibly gives the Tail a bit of an edge, as the Quarry will be covering some of the same ground twice.

If you're playing with three people, one player is the Quarry and the other two are the Tails, who are free to coordinate however they wish.

For a larger game, just pair people up and have them play parallel games - each Quarry can only be tagged by the Tail assigned to them, but Tails and Quarries are free to share information and assist one another.

(Note that this variant has not yet been tested.)

For a game with more than three players, split the players into two teams, a Quarry team and a Tail team, with the Tail team being slightly larger. One of the Quarry team should carry a briefcase, an open umbrella, a large manila folder, or some other prop. This prop can be passed between players or even left at a drop-off point, but it cannot be concealed inside a bag or coat - if it's being carried, then it should be clearly visible.

The rules are the same as the two-player two-zone version, except that the briefcase is the thing that needs to get to the end zone. If a Tail player tags a Quarry player who is carrying the briefcase (or manages to pick the briefcase up from a drop-off point), then the Tail team wins.

You'll also need an end zone that has more entrances than Tail players, to avoid a stalemated "one guard per exit" endgame.