Difference between revisions of "Kill Your Own Grandfather"

Aim of the game

Be the team to control the most time zones when the game ends. Try not to get assassinated by anyone.

To end of the grid have an ‘out’ zone with a hula hoop in it as well. This is where all the balls start out. The out zone is where assassinated players stand. 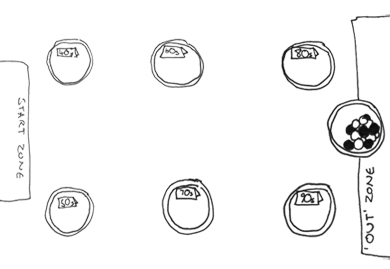 Mark each team’s vests and coloured balls with numbers 1 through 10. The numbers have to be very big and easy to read. (write the word SIX on the ball so it is clear that it is not an upside down 9).

Split your players into two teams and give each team player a vest and a ball. Each player now has a number, the player on each team with the highest number is the Grandfather/mother.

To start the game, put all the numbered balls in the hula hoop in the ‘out’ zone. All the players start at the opposite end of the play space.

You can pick up and move any ball except the ball with your own colour and number on it. This ball is your kryptonite, carrying it anywhere will automatically kill you.

If a player is touched with the ball with the same number and colour as them, then they are out. Once you are out, you are out for the whole game. Go to the ‘out’ zone and drop any balls you were carrying into the hoop there for other people to pick up. (note: the ball with your number but the enemy colour, does not kill you) 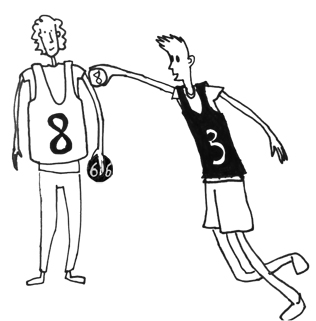 • No throwing balls to assassinate people, you must be touching the ball for it to count.

A team takes the territory by putting balls into the hula hoop in that time zone. Whichever team has the most balls in the hoop has control of that zone.

Once a player picks up a ball, they can only put it down again in a hoop. Throwing it is not allowed. You may defend a hoop by blocking an opponent’s path as long as it is a non-contact block like in basket ball.

When the first team is down to only two remaining players, the ref should shout out “Beware of the paradox!” to remind the players that killing their own grandfather is an option.

Whichever team has control of the most zones at the end of the game is the winning team. Look around the play space and count how many hoops are predominantly colour A and how many are colour B. In event of a draw, whichever team ended the game wins.